Spotted a new collocation for the word blue today, when looking for a pair of jeans – oil blue.

Admittedly, they are probably just being marketing-minded, inventing (?) such a color of jeans. However, what gives?

The color itself doesn't look blue to me:

. Isn't oil supposed to be black or yellowish? May it be that the denim is very smooth (like oil)?

Is there a cultural meaning associated with this word combination?

If you are seeing blue smoke from your exhaust this means that your car engine is burning oil.

Companies manufacturing paints, crayons, dyes, or fingernail polish are faced with the unenviable task of naming perhaps dozens of shades of the same base color, and they will often name some shades after everyday objects. Sometimes those names are simply reminiscent of the object they are named after, not exact matches. So banana yellow may not be the exact shade as a real banana, and denim blue might not precisely match your Levi's. In this case, this dull bluish green color had to be named something, and someone was evidently reminded of an oil slick or the blue tint of oil-laced exhaust.

Eggplant? Maybe not exactly, but close enough for a color palatte.

Here is oil blue as defined by Pantone 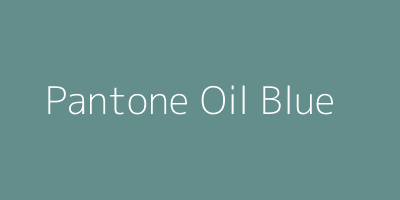 Seems this colour may have been with us for a long time The Chemical News and Journal of Industrial Science vol 117, 1818

Not the answer you're looking for? Browse other questions tagged phrases colors or ask your own question.

16
Etymology of the color name “orange”
4
Pronunciation difference between “collar” and “color”
2
“Blue sky thinking” phrase
1
What's the name of the color
0
“The sky is blue” - Is it a clause?
0
Is “a deep red in color” redundant?
0
What's china blue?
0
How should “red and blue coloured kingfisher” be hyphenated?