When to choose em dash over parenthesis for parenthetical phrases?

Okay, but what constitutes "stronger"? Does the length of the parenthetical phrase come into play? The distance of the diversion from the main thrust of the sentence? Some kind of qualitative gut feel? All of the above?

I once read a memorable column (by Willam Safire) that talked about this. I ran across it in his book You Could Look It Up, which is a collection of his newspaper columns about language.

I managed to find a scan of the original column: 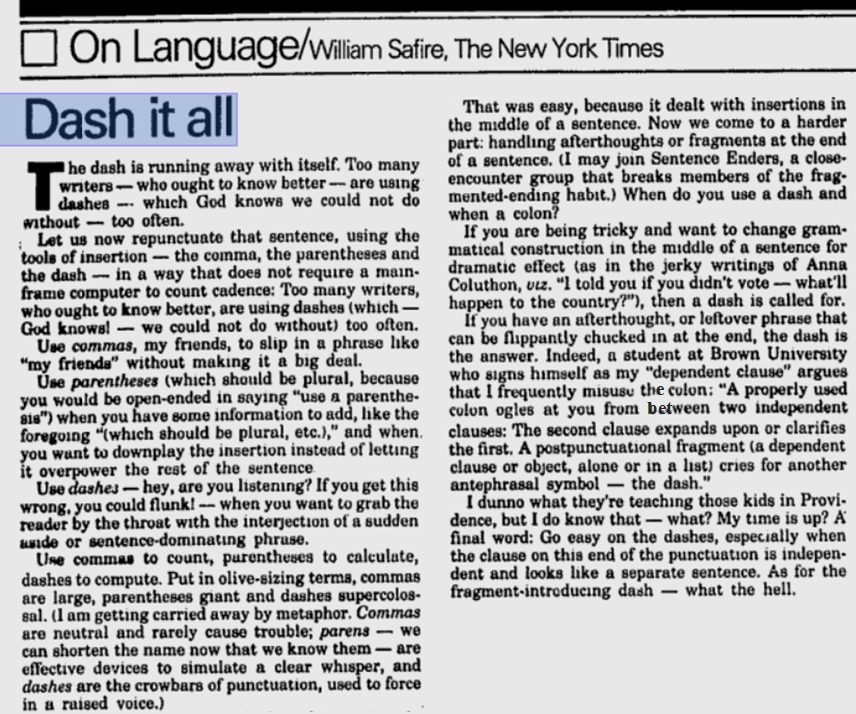 For a view directly opposed to Wikipedia's, consider this entry from Words Into Type, Third Edition (1974):

Parentheses are used to enclose expressions that are of such a nature that they would not be sufficiently set off by commas or dashes. Many times dashes or parentheses are equally good style, but parentheses should preferably be reserved to enclose matter having no essential connection with the rest of the sentence in which it occurs.

Dry out each substance in an oven under slow heat (do not char).

In 1732 Joist Hite (he spelled his name in a variety of ways ) entered the valley with sixteen families.

Most took a "newspaper" (thirty days), a few a "magazine" (sixty days), and one gangster had pleaded guilty to carrying concealed weapons and had taken a rap for a "book" (a year and a day), rather than be held for investigation on a major charge.

The frontier—upland and mountain regions to be settled later in the eighteenth century—offered much more uniform conditions.

The solid structure of trees—that is, the dry matter in the roots, stalks, and branches—is about 95 percent carbon and oxygen.

Not only was the fur trade of great importance in providing the settlers with much of their heavy clothing—a portion of the trade, it may be noted, that would not swell the export figures—but it was also one of the many minor ways that the settlers had of eking out a living.

"My dear little girl"—his tone was all concern—"I'm so sorry."

The Chicago Manual of Style, Fifteenth Edition (2003) endorses the Words Into Type view:

6.97 Characteristics of parentheses. Parentheses usually set off material that is less closely related to the rest of the sentence than that enclosed in em dashes or commas. ...

I don't entirely agree with this analysis, as my final sentence in this comment illustrates, but I do think that it makes an interesting case for using a consistent hierarchy of punctuation marks. Safire's article and the Wikipedia entry essentially endorse the same thing, except that they reverse the ranking of parentheses and em dashes.

As a practical matter, parentheses are vastly superior to em dashes in sentences that contain more than one broken-out phrase—as in the case of "those under 40" and "those over 40" in the fourth example of parentheses use above—because the fact that parentheses have different shapes for beginning and end helps readers avoid getting bewildered by multiple punctuation marks in a small space. In many other instances, though, it's a toss-up; and I would be more concerned about avoiding overuse of either one (or both) than about deciding which one to prefer.

Not the answer you're looking for? Browse other questions tagged punctuation parentheses dashes or ask your own question.

4
Are the days of using dashes over?
0
Em dash and list of things
29
Parentheses vs. double commas vs. dashes to provide additional detail
3
Using dashes vs. commas in business communications
1
dash to connect two thoughts
0
Phrases inside parenthesis and hyphens
0
What does the dash ("—") in this sentence do?
-2
Using ' – ' in a sentence?