Why do we say "lowest common denominator" when we mean "greatest common divisor"?

For example, we could say HTML is the lowest common denominator on the web", because one can be sure all web browsers are able to render HTML (but not Flash or Java). If I want my web page to show properly everywhere, I know I can use maximum set of features shared between all web browsers, i.e. HTML. Yet, we don't say HTML is the greatest common divisor, which would be a correct analogy.

Why is the mathematical term lowest common denominator misused in everyday usage?

Because people think of something as "low" and "common", both of which it is, and then get themselves mixed up and say "lowest common denominator" which is not what they mean. (This vaguely similar to the way people say "steep learning curve" based on informal ideas of steep surfaces being difficult to climb, without thinking carefully of what a learning curve is and what steepness actually means for one.)

In short, the typical usage of "lowest common denominator" is a logical mistake. To speculate why it happens, my guess is that it's brought about by wanting (rightly) to use the terms "low" and "common", and the temptation of using (incorrectly) the technical-sounding term "lowest common denominator". That, and the fact that one has seen others use the phrase in that sense!

Using something that's actually logically right — like "highest common factor" — sounds positive rather than negative, so this is less used. (Although, in your HTML example, you could use something like "largest common subset of features", and be both right and understood.)

That's the answer, but explanation of the literal meaning…

To take the example of TV shows — because the citation given on Wiktionary is "Reality TV really is appealing to the lowest common denominator in audiences" — it is often said of low-quality populist shows that they are dumbed down, and at the "lowest common denominator", in order to cater to a large population. In this case, it is true that the quality may be low, and that the intention is to make something of a quality whose acceptability is common to the large population. But the resulting quality of the show is actually the greatest common factor! It is at the greatest level of quality that is still common (that's why it's low, because it needs to be common). If they were actually picking the lowest common quality, it would be even lower, or zero.

[Mathematical background: In mathematics, there are two related concepts: the greatest/highest common divisor/factor of two integers, say 15 and 24, is the greatest factor common to both, in this case 3. (Note that 3 is lower than 15 and 24.) The lowest common multiple of the integers is the smallest multiple common to both; in this case 120. (Note that 120 is greater than 15 and 24.) So the lowest common multiple is greater than the numbers, and the greatest common factor is lower than the numbers. This itself should be enough to suggest that if what you want to talk of is something low, you must use "greatest common…", not "lowest common…". But most people don't think so much.

Edit: Someone on Wikipedia has already explained this:

This approach of making use of only the greatest subset of function common to all supported systems is often disparaged when the common feature set is sparse or weak (by analogy, having a small "greatest common divisor"). In this context colloquial usage has conflated the concept of "greatest common divisor" with the familiar sounding jargon of "least common denominator", which seems to emphasize smallness of overlap through the word "least", but actually refers to a different and inappropriate mathematical concept.

Edit 2: In case it helps, below is a vague picture illustrating what I mean. (Anyone please feel free to make a better image and replace this.) 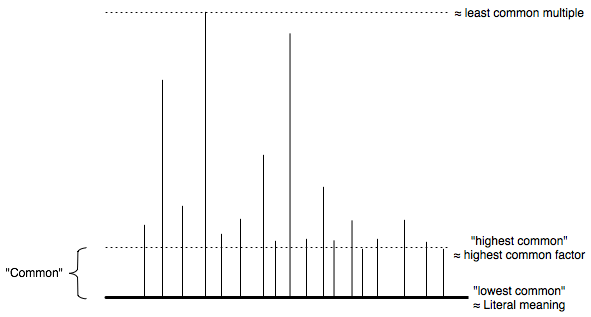 The suggestion to use “greatest common factor” instead kind of misses the point that the analogy is that people or web browsers (or whatever) are fractions, not integers. Sure, if we wanted to make the analogy that web browsers are integers, then speaking of the “greatest common factor” would make sense. But that analogy has no currency, so the suggestion is dead on arrival.

The lowest common denominator is the lowest to which all of your addends can be converted.

A concept (or argument or piece of entertainment) has to be expressed in a way that it is accessible to each member of the intended audience. This is labeled, by way of analogy, the "common denominator" -- and whatever expression is easiest, or most denigrated, is the "lowest" common denominator.

The only real error comes in when someone says reducing to the lowest common denominator. No reduction is involved: when you convert the fraction to the l.c.d., you aren't changing its value, only the way it's written.

When comparing disparate things, you can't use simple, direct comparisons. Whether that comparison is between individuals, between distinct populations or, in the case of your example, between different technologies, there is no apples-to-apples comparison. So how can you compare apples to oranges and get away with it?

Well, we all learned in school that you can compare things that are different not just in magnitude but in substance. Rational numbers with different denominators can be rewritten as numbers with a common denominator, and can then be treated as things which differ only in magnitude (specifically, in the magnitude of the numerator). The lowest (or least) common denominator is the number (or term) that expresses the greatest commonality between the elements to be compared; the once-disparate elements have been distilled down to the simplest expression of their sameness.

Because people mix up the concepts, and use the one that sounds more like what they want to express. The lowest common denominator sounds like it's smaller than the greatest common divisor, when in fact it's the opposite.

It's not a very good expression to use outside mathematics, as it sounds better when it's used incorrectly.

It is just the deliberate use of a set phrase to suggest negative features. Compare

Because, even in rich sophisticated western societies, huge numbers of people are almost innumerate and therefore unfamiliar with simple arithmetical expressions of this sort.

I just asked a university-educated friend "what is the lowest common denominator of a half and a third?" - Some conversation ensued before I got an answer. Try it.

Journalists and broadcasters who use the phrase ought to agree that by doing so they are are pandering to the lowest common denominator of their audience. ;-)

this is how i was able to make some sense of this to myself:

while LCD is for a more expansive set that the members or elements could be or are a part of, with the possibility of having more members yet unknown ~ or an undefined set. alternately the LCD can be arrived at without knowledge of all members of that set. and as new members come into existence, we can ask if they could possibly belong to that particular set.

keep in mind also that GCD and LCD are not exclusive properties. Based on my understanding, it also helps to make a qualifier where

Anyway, to apply this analogy to its colloquial use i played around with an abstraction like Ignorance and, using the parameters above, tried to come up with a scenario where ignorance is the GCD and LCD of some hypothetical members. it is at this point that my brain sprung a leak.

Not the answer you're looking for? Browse other questions tagged mathematics or ask your own question.

1
What does "to be the lowest common denominator" mean?
45
What is meant by "steep learning curve"?
1
What are non-ironic English expressions used with a meaning opposite to their literal meaning?
1
Usage of the word "denominator"

4
Why is the common meaning of logical terms ('and', 'or') incongruous from that in math?
3
Understanding smaller parts without understanding what they mean when put together
138
Why does "quadratic" describe second power when "quad" means "four"?
6
Why do we say 24 x 7 x 365 rather than 24 x 365?
2
Why do we say "at right angles", not "at a right angle"?