What is the difference between "lay" and "lie"?

How do I know when to use lay and when to use lie, and what are the different forms of each verb? I'm always getting them confused.

The verb lay is transitive.

You lay something on the table.

The verb lie is intransitive.

You lie on the table when you are operated upon.

The confusion comes because the past tense of lie is lay:

He lay on the table for two hours before he was operated upon.

Few native speakers get this right. Most people would say, "He laid on the table for two hours." Bill Clinton constantly made this mistake in speeches.

Historically, "lay" is a causitive verb formed from "lie", by a process which is now obsolete in English, but has left some other examples: "rise/raise" and "fall/fell".

In the case of "lie", probably because both words are common and the past of "lie" happens to be the same as the present of "lay", they have become generally confused, and for many people they are no longer distinct.

I don't know why the same has not happened to "fall" and "fell", but it may be simply because the verb "fell" is not very common, being used only of trees and enemies.

These English verbs give an incredible amount of trouble for everyone,
mostly because people are not told the simple truth about them. Here it is:

All of these positions are defined with respect to the human body, and human subjects are prototypical for these verbs; non-human subjects (The tide is rising) are metaphorical.
In each case, since they are intransitive, these verbs have no direct object.

These three inchoative verbs each have a related causative verb:

A graphic depiction of a fraction of the network of lie/lay is shown here.
Similar graphics could be made for sit/set and rise/raise. There's a lot going on.

The notion that most native speakers are making a mistake about how to use language is ludicrous in the extreme. To paraphrase the linguist Dwight Bolinger, the only possible way that language can be made and defined is by how native speakers, in the broadest sense, use it.

To suggest that the majority are making a mistake completely rules out the idea that languages can change. As we all know, languages do change, so that makes the other notion fatuous.

In this case, it isn't an issue of language change. It's simply another bad prescription; actually, using 'bad' is redundant as a prescription is always bad.

[Usage discussion of lay from Merriam-Webster:]

lay has been used intransitively in the sense of “lie” since the 14th century. The practice was unremarked until around 1770; attempts to correct it have been a fixture of schoolbooks ever since. Generations of teachers and critics have succeeded in taming most literary and learned writing, but intransitive lay persists in familiar speech and is a bit more common in general prose than one might suspect. Much of the problem lies in the confusing similarity of the principal parts of the two words. Another influence may be a folk belief that lie is for people and lay is for things. Some commentators are ready to abandon the distinction, suggesting that lay is on the rise socially. But if it does rise to respectability, it is sure to do so slowly: many people have invested effort in learning to keep lie and lay distinct. Remember that even though many people do use lay for lie, others will judge you unfavorably if you do.

I love pictures in You Tube video. A picture thousand words! 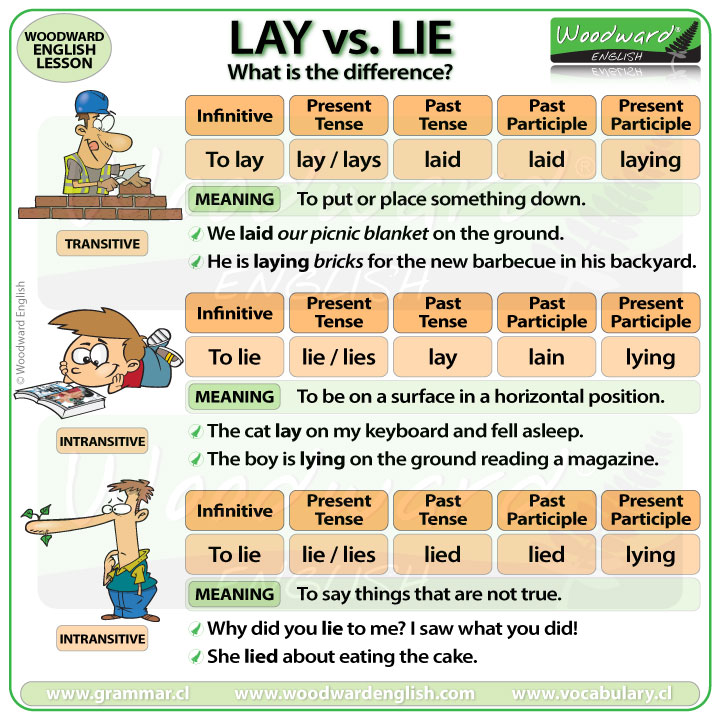 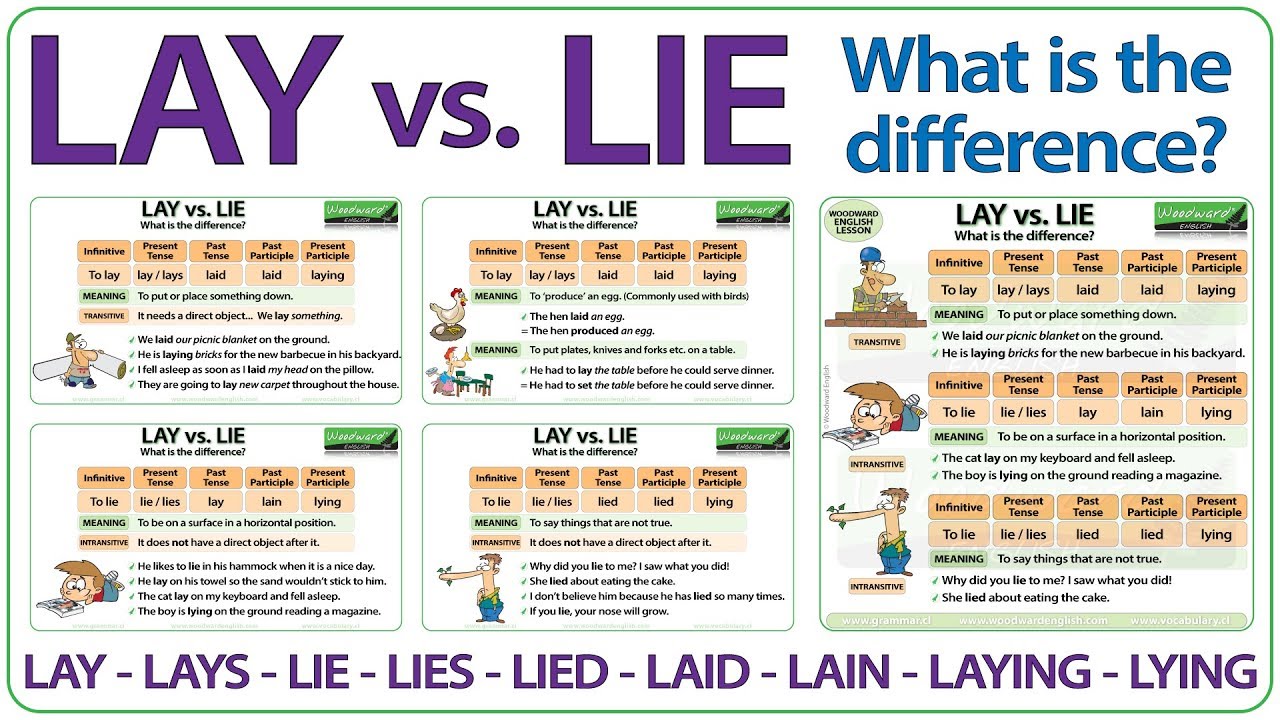 Not the answer you're looking for? Browse other questions tagged verbs differences confusables lie-lay-lain-laid or ask your own question.