Starting with the Fifth Edition (1936), seven generations of the Merriam-Webster's Collegiate Dictionary have included (under the entry for tap) three definitions of "on tap," currently worded as follows:

(The first two of these three definitions go as far back as the 1864 edition of Webster's American Dictionary of the English Language.)

But the Tenth Collegiate (1994) introduced a fourth definition for "on tap":

The "H. W. Wind" cited by Webster's appears to be Herbert Warren Wind (1916-2005), an American sportswriter who wrote most often about golf. I have frequently heard "on tap" used in this relatively new fourth way in recent years, mostly in connection with impending sporting events. In fact, the San Francisco Giants radio network has a sponsored segment called "What's On Tap" ("brought to you by TAP Plastics") devoted to identifying and briefly discussing the next game or series of games on the Giants' schedule. I can sort of see how "on tap" in the sense of "in reserve" or "at the ready" might be extended to something like "ready to happen but still in the future"; however, the meaning "next on the schedule" seems another (and rather long) jump from there.

I note that Eric Partridge lists two seemingly unrelated slang phrases from British English: "on the tap" ("begging for money") and "on tap" ("all modern conveniences, including h. and c.").

The second British example Eric Partridge refers to having a modern house with both hot and cold running water on tap:

This is somewhat similar to Merriam-Webster's first and third definitions in that they all suggest having something readily available when needed*:

The fourth is an extension of this:

Something coming up soon is readily available.

* "On tap" is such a natural phrase for "readily available" I almost used it here to describe itself.

Chicago has a couple of matches on tap. Tommy Ryan and Bill Howson, the Englishman, being on the card at 144 pounds for Dec 12. Before this, however, Johnny Van Heest and Tom White, 120-pound men, will meet to-day. 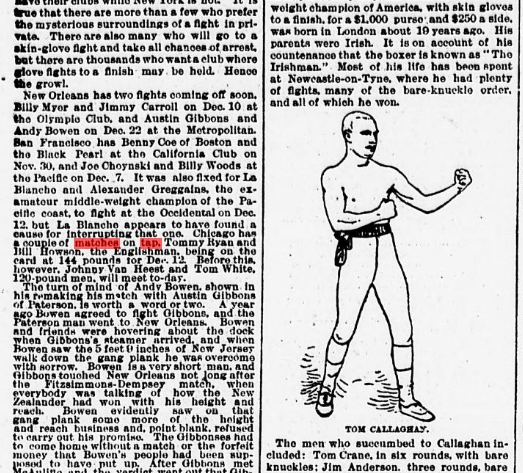 I'm not familiar with this fourth example of "on tap" in British usage, but all the others are. (Although, I can't recall hearing "on the tap" ("begging for money"). It may be a bit dated.)

I have done a great deal of reading on chess history, and it is clear to me that the original phrase was on the tapis. Upcoming matches were constantly referred to as on the tapis in the 19th century; one of many dozens of examples in my notes comes from the Albion of Feb 5, 1853. I understand that the origin of this older phrase is similar to on the table, and I feel confident it was shortened to on tap rathe than coming from other sources.

Somehow I failed to note Jerry Spinrad's answer until now—but I think his suggestion that "on tap" in the sense of "coming up" emerged from the older idiom "on the tapis" has a lot going for it, as a matter of chronology. The American Heritage Dictionary of the English Language, fifth edition (2010) has this entry for tapis:

Bartlett Whiting, Early American Proverbs and Proverbial Phrases (1977) finds North American instances of "on the tapis" from as early as 1744:

Charles Fennell, The Stanford Dictionary of Anglicized Words and Phrases (1892) pushes the phrase's English usage back to 1690 and argues that "on the tapis" originally had essentially the same sense as an idiom that is considerably more common today, "on the table":

Evidently "on the tapis" was a very well-known idiom for a long time, and it has evolved from a simple sense of "on the table" to something like "in the offing" or "under consideration." In the latter situations, the sense seems very closely akin to that of "on tap."

Jerry Spinrad's remarks about chess matches being characterized as "on the tapis" are supported by Elephind matches from as early as this one from "The Chess Congress," in the New-York Daily Tribune (November 3, 1857):

In the minor tournament Messrs. Homer and Solomons also made a draw, so that in both tournays the contestants stand one game apiece and two draws.

A match is on the tapis, in which Mr. Morphy will play single-handed against the five strongest amateurs of the New-York Chess Club in consultation.

I also find instances of horse races "on the tapis" from sources as early as 1829 in Australia and 1856 in the United States.

There's matter in this. A schism has occurred amongst the heads. The Wealthy Knight of Regentville, it is said, means to get up races on his own estate. Already, we learn, some good matches are on the tapis. There's one between Mr. Lawson's Spring-gun breed and Ben[?]elong. ... Without putting your hands in your pockets it's in vain to expect there will be stakes---and without the prize what is racing? It is like fish without sauce.

In the context of prize fighting, the first occurrences I've found are similarly old. From an untitled item in the [Sydney] Australian (February 20, 1829):

A private match is on the tapis, we hear, to be knocked up between two of our most notable Colonial prize fight men, with the toss up of a purse of £50 or so. It will be all private, so as that the "beaks" shall not get an inkling to spoil sport.

An encounter took place yesterday forenoon between two persons who are fond of practising the pugilistic art for a prize, in Happy Valley. It is understood to have been a very warmly contested fight and lasted a considerable length of time. The pugilist who won the prize had a hard task before him and did not leave the field in a very comfortable condition. It has been intimated that quite a number of these artistic rencontres are on the tapis, and the lovers of this science will have an excellent opportunity of gratifying their tastes.

"On the tapis" also shows up regularly in nineteenth-century descriptions of duels and matrimonial alliances.

Although I was completely unfamiliar with the idiom "on the tapis," it has appeared in English writing since from as long ago as 1690, and has been used in connection with such sporting events as horse races and boxing matches (in Australia) since at least 1829 and (in the United States) since at least the 1850s. Jerry Spinrad's suggestion that "on tap" in the sense of "coming up" may be a corruption of "on the tapis" seems quite plausible to me—particularly in view of its being used in sporting contexts where the meaning seems virtually interchangeable with "on tap" when the latter phrase began appearing late in the 1800s.

Although I'm unaware as yet of any definitive proof that "on tap" in the sense of "coming up" originated as "on the tapis," the connection between the two seems strong enough to render any other explanation of the idiom's origin uncertain.

Not the answer you're looking for? Browse other questions tagged meaning etymology idioms american-english or ask your own question.

16
Does the phrase “begging the question” make any sense?
5
Origin of doolally [tap]
3
You're Coming On All-(blank), Coming Over All-(blank)
12
Source of 'BB' in the sense of 'small, spherical pellet of shot'
7
Origin, meaning, and historical change (if any) of the idiom 'stem the tide'
6
Where does the phrase “makes sense” come from?
11
Making sense of dollars and “geetus”
3
Origin of the journalistic sense of scoop