Origin of “A Great Man Once Wrote/Said”

I've seen many a quotation begin with A Great Man Once Said or A Great Man Once Wrote, and as I was writing something just now, I began with that before realising that I don't actually know where this lead-in actually comes from.

A popular reference is the last line of the film Kick-Ass, and I've found a 1993 music album with this title, but I'm sure I've read this lead-in in much older literature before.

Is there some well-known passage in a book or poem which first popularised this phrase? Or some other item of pop culture?

Ascribing a quotation to a great man without naming him

If the critical distinguishing feature of the formulation "A great man once said [or wrote]" is the ascribing of an actual quotation—and not merely an aphorism—to an unnamed "great man," perhaps an instance from Montaigne's 1588 essay "De l'Art de Conferer" ("Of the Art of Conferring [or Conference]" in earlier translations; "Of the Art of Discussion" in Donald M. Frame's translation) qualifies, though Montaigne may have expected his readers to recognize the quotation and to know that its author was Quintus Curtius:

From the John Florio translation (1603):

Where he [Tacitus] also saith that Vespasian, by the favour of the God Serapis, healed in the citie of Alexandria a blinde woman with the rubbing and anointing her eyes with fasting spettle, and some other miracles, which I remember not well now, he doth it by the example and devoire of all good historians. They keepe a register of important events; among publike accidents are allso popular reports and opinions. It is their part to relate common conceits, but not to sway them. This part belongeth to Divines and Philosophers, directors of consciences. Therefore, that companion of his, and as great a man as hee, said most wisely: Equidem plura transcribo quam credo: Nam nec affirmare sustineo de quibus dubito nec sub ducere quæ accepi: 'I write out more then I beleeve: for neither can I bide to affirm what I doubt of, nor to withdrawe what I have heard.'

From the translation by Charles Cotton (in an edition published in 1877):

What also he [Tacitus] says, that Vespasian, "by the favour of the god Serapis, cured a blind woman at Alexandria by anointing her eyes with his spittle, and I know not what other miracle," he says by the example and duty of all his good historians. They record all events of importance; and amongst public incidents are the popular rumours and opinions. 'Tis their part to relate common beliefs, not to regulate them: that part concerns divines and philosophers, directors of consciences; and therefore it was that this companion of his, and a great man like himself, very wisely said: "Equidem plura transcribo, quam credo: nam nec affirmare sustineo, de quibus dubito, nec subducere quae accepi;"

Montaigne never cites Quintus Curtius by name in this essay or in any other; a scholarly work ("List of Some Authors Read by Montaigne" in Grace Norton, Studies in Montaigne (1904), page 279) asserts that Montaigne quotes Quintus Curtius seven times in the course of his Essays without attribution.

Early occurrences of 'a great man once said'

On a more literal level, the exact phrase "a great man once said" appears in at least two sermons of the eighteenth century. From the "Sermon, II' in Increase Mather, Wo to Drunkards. Two Sermons Testifying Against the Sin of Drunkenness, second edition (1712):

Know for certain, that who ever liveth & dieth in this Sin, shall Perish to Eternity. It will be a folly for any such Sinner to expect Salvation. Can you be Saved without an Interest in Christ? This Lust alone, if lov'd or liv'd in, will keep Christ out of the Soul. It is reported, that a great man once said to Luther, Sir, we would all willingly be Christians, but we cannot find in our hearts to leave that custom of drinking to Excess. But a man must leave that Custom, or Die & Perish a Christless Sinner for ever.

Here, it should be noted, "a great man" probably means "a man of substance or importance in the world," not "a man of literary, artistic, or philosophical genius."

And now, sinners, bethink yourself seriously, whether it be not the height of folly to permit yourselves to be driven by the evil spirit and your own lusts down the fatal precipice of vice, and to wallow in those brutal gratifications which will render you contemptible here, and miserable hereafter. As a great man once said, "Words cannot fully describe the madness of those sinners, who, that they may live the life of beasts here, stick not to share the lot of devils hereafter." What a pity is it that sinners do not lay these awful considerations to heart!

Here the "great man" is presumably a great theologian—though not one that Burgess chooses to name.

But there is also this secular occurrence of the related phrase "a great man once told me", in a 1736 translation of The Dictionary Historical and Critical of Mr. Peter Bayle

Early occurrences of 'a wise man once said'

From Henry Parker, The Trojan Horse of the Presbyteriall Government Vnbowelled (1646):

Men grossely ignorant in matters of Divinity, must be Judges of Doctrine; and they that cannot in a small time be taught what heresie is, much lesse how to discern heresie from truth, determine of it, and others be bound to submit to their judgement. Men whose education and imployment is either in the field, or the shop, of whom a wise man once said, that they should not be sought for in publique councell nor sit on the judges seat, because they understand not the sentence of Judgement; men who neither know how to doe right if they would, nor would care for it if they knew it, (for where the minde that should rule is weake, the corrupt passions that should be ruled, breake out into all disorder:) These must be trusted with the making of church-Lawes, and Government even of those things that concern the precious souls of men for whom Christ died; to say nothing of their quiet, their reputation, and their purses, which will be all exposed to those injuries that may be expected from blind malice, revenge, envy, covetousnesse, partiality, and insolence. All these mischiefs are the more to be feared, in regard of the distempers of this sad time, in which this Government is sought to be erected.

From Symon Patrick, The Parable of the Pilgrim: Written to a Friend (1667):

But whatsoever kindness any may have for them [people of "sullen gravities" and "lowring Countenances"], I must acknowledge myself to have a Spirit more tender. I am not ashamed to be thought a man of sense, and that have some feeling both of pain and of pleasure. Let them call, if they list, all our passions infirmities, yet (as a wise man once said) I rather choose to enjoy this weakness, then their stoutness and strength, and to be sick of this disease, then to have their kind of health.

And from Symon Patrick (again), The Heart's Ease, Or, A Remedy Against All Troubles, seventh edition (1699):

We multiply our evils by our trouble, and bring those upon our selves which perhaps were never intended for our portion. But our quietness disappoints the Enemy, and will weary him in his assaults, when he sees that we do but grow better by what befals us, and turn it into vićtory and triumph. So a wise man once said, No man ever reproached me more than once ; for by patient bearing his reproaches the first time, I taught him to abstain the second.

From Machiavelli to Publius Syrrius and in many ancient cultures many ancient proverbs cite ' the words of 'the wise man' the thing is... none of the words bid them immortality so they weren't all that damn wise were they. I think the fascination, is sarcasm. Concern yourself, with the present, every era will have its wise man, with their teachings. Will these teachings give you anything more than their sarcastic spinoffs?? NO- its all just food for thought. Personally if you really want an answer Id go with this

Wise men say, and not without reason, that whoever wished to foresee the future might consult the past. (Niccoló Machiavelli)

Year's journey through France and Part of Spain - Page 79 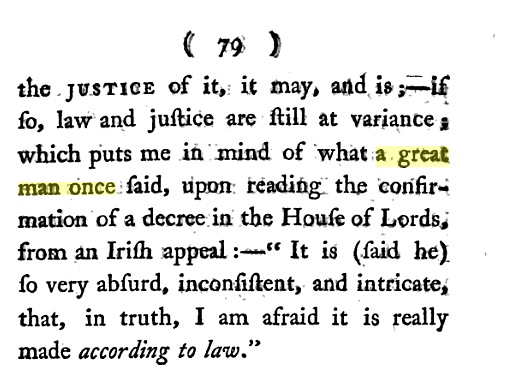 And here is "a great man once told me" from Google books in 1736, link

The history of Naples says, notwithstanding, that he was reputed supposititious : however, he proved a very great man : but most bastards are brave, as a great man once told me.

This appears to be a translation from Brantôme's Les vies des dames galantes. It's not clear the exact date it was written, since it was published posthumously, but Brantôme died in 1614, so it must have been written before then.

Not the answer you're looking for? Browse other questions tagged etymology phrases expressions history phrase-origin or ask your own question.

3
Origin of once again
8
The history and use of the term “moth hour”
10
“Bust a cap” meaning and derivation
7
Why is German anti-aircraft fire called “Archibald”?
1
When did the phrase “eat sh*t” enter the English Language?
1
“Are you a man or a mouse” phrase origin
3
What is the origin of “man on the spot”?
0
What does “going Ozymandias” mean?
4
What are the origins of “gender confirmation” surgery?
3
Origin of the phrase ''Respect,man/bro. ''?