Meaning of “Butter is Gold in the Morning, Silver at Noon, and Lead at Night.”

In his book A Complete Collection of Scottish Proverbs: Explain'd and Made Intelligible to the English (1721), James Kelly offers this interesting saying (page 74, #138):

"Butter is Gold in the Morning, Silver at Noon, and Lead at Night."

"A common Saying, of whose Truth or Reason I know nothing."

What is the literal sense of this adage? Does it refer to color changes in different light, to phase changes at different temperatures, to effects on the body at different stages of digestion, to monetary value at different times, or to something else? And what is its most likely figurative meaning? Thanks!

In a treatise on nutrition, written at some time before his death in 1604, Elizabethan naturalist and physician Thomas Moffet or Muffet cites this as already an ‘old Proverb’, and provides a context:

Butter is hot and moiſt, of gross Nouriſhment, ſoftening rather than corroborating the Stomach, hastening Meat into the Belly before it be concocted, rheumatic, and eaſily converted into oily Fumes, which greatly annoy both Throat and Head. It is ill for the Stomach, Rheum, and all Fluxes either of Blood, Humors, or Seed ; and in truth it is rather to be used as Sauce and Phyſic, than as Meat to feed upon. It is beſt at Breakfaſt, tolerable in the beginning of Dinner, but at Supper no way good, becauſe it hindereth Sleep, and ſendeth up unpleaſant Vapours to annoy the Brain, according to the old Proverb, Butter is Gold in the Morning, Silver at Noon, and Lead at Night.
—Health’s Improvement, first published 1665 (this is from an edition of 1746)

The adage is completely based on our experiences after having butter as food. It has nothing to do with the colour or the value of the milk product. It refers to our metabolism and our capacity to digest butter. We all know that butter is rich in fat and protein. So after having butter with our food we have to digest it well.

In the adage 'morning' refers to breakfast and 'gold' refers to something which is of much value even in very small quantities. So this part of the adage suggests that if butter is taken in our breakfast then it will not only make the food tasty and wholesome but also release much energy which will be very productive during our day long work and it will also be fully digested leaving behind no fat.

Night refers to dinner or super and lead refers to something that is of far less value than gold and silver and is also very heavy which not easy or advisable to carry with us. So this part of the adage suggests that if butter is taken in our dinner or super then it will weigh upon our health. It will not be easily digested and and it will leave behind a heavy layer of fat if practised frequently.

Taking the most common metaphorical uses:

The main metaphorical meaning of gold is of something that is of high value.

The main metaphorical meaning of silver is of something that is of high value, but not as much as what you are using gold to describe.

The main metaphorical meaning of lead is of something dull or heavy. (Though scientifically this is a tad unfair, gold is much denser).

So, butter is an extremely nice food in the morning, and is a very nice food at noon, but can be heavy and dull in the evening. (I can't say that I necessarily agree).

Another possibility though is that it uses a more obscure set of metal symbolism, that of alchemy and magical associations. Here gold and silver being linked with the sun and moon respectively associate them with key salubrious influences conducive to life (especially in balance with each other). Lead being linked with Saturn associates it with limitation, mortality and saturnine (dark, gloomy, melancholy) outlooks.

So, butter is healthy in the morning and noon, but a danger that could cause melancholy, limited health, and even death in the evening!

Edit: Considering that the earliest citation we've found was that found by StoneyB, and the source was a Paracelsian, this second possibility seems to more likely of the two.

Either way, it's saying it's great in the morning, good at midday, and bad late in the evening.

It's been used metaphorically:

Oh! how sweetly did the syren representative sing at first! How quickly it brought forth destruction, and proved a monster! Nero was pretty tolerable for five years, and this butter-print parliament was gold in the morning and lead at night.—The Loyal Satyrist; or, Hudibras in Prose. Written by an unknown Hand in the Time of the late Rebellion, but never till now published. (Printed in 1682, but five years after the start of the Interregnum would suggest written ca. 1654).

About oranges, we have a similar Saying in Italy. This similarity would suggest that we're talking about the best/worst moment in the day to ingest this kind of food. Amazing: we're living so far but we're thinking through the same schemes.

Not adding anything here except for an earlier citation than the excellent one from @StoneyB. Here is from Thomas Cogan's (1584) The Haven of Health. He writes that the proverb is so common that he can omit explaining its meaning.

Of both sorts of creame is made Butter, which if it be fresh and newe made, is verie wholesome, especially if it be eaten in the morning, but afterward it is not so good, according to the old English proverbe, Butter is Gold in the morning, and Silver at noone, and Leade at night. The meaning whereof because it is so common, I will here omit. The chiefe properties of Butter are recokoned to be three in Schola Salerni as followeth.
Lenit et humectat, soluit fine febre butyrum. [butter softens, moistens, and dispels fever] 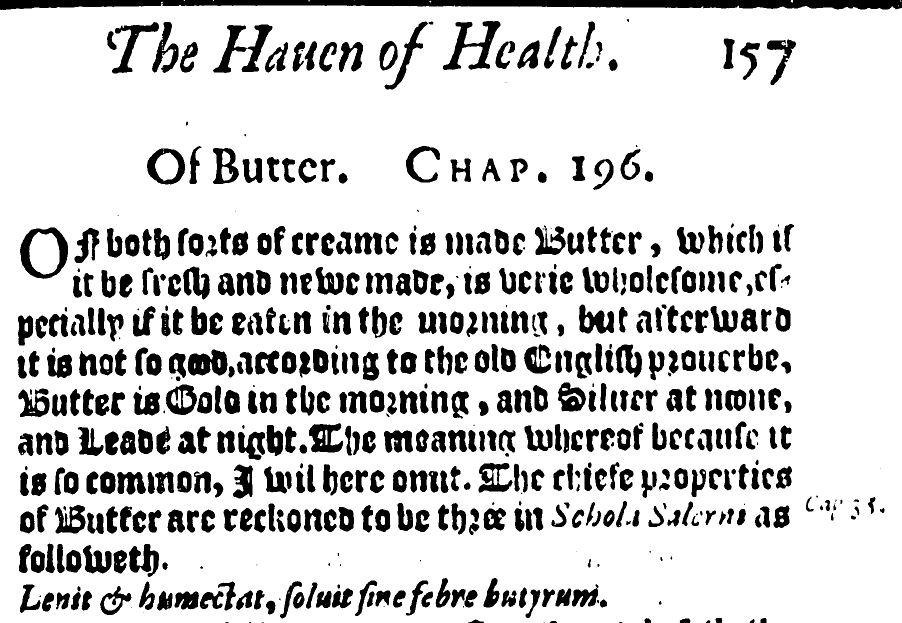 I believe this is a comment on the relative pleasure derived from eating butter at different times of the day, i.e. it tastes best in the morning after the night's fasting, not quite as good at lunchtime, and is perhaps too rich for supper.

I've heard this as "Fruit" and not "Butter", but it refers to the effect on the body. In the morning or at lunch time, the proverb is saying that butter is precious; a good thing to eat. At night, eating butter is more like eating lead; heavy and uncomfortable.

I've also heard a corollary with Whiskey where the gold is in the evening and the lead is in the morning.

This might also have to do with how well butter keeps with no refrigeration. We live in Los Angeles, and between the months of May and November we have to keep the butter in the fridge (where it is too hard to spread). If we leave it on the table - as one would have had to do in 1721 - it is delicious in the morning, so-so at lunch, and either liquid or slightly off-tasting (or both) by supper.

A similar expression appears in Patrick O'Brian's The Truelove:

Padeen was useful too in heaving on the very heavy parts, and even more in warding off Davies, the ship's cook, the gunroom cook, the captain's cook, the ship's butcher, and all their respective mates, who were urgent to have their pieces out of the sun and into the relatively cool part of the ship or the salting-tubs; for swordfish was like mackerel in these latitudes, mate, prime before sunset, poor-John the second day, and rank poison the third.

Not the answer you're looking for? Browse other questions tagged meaning proverbs aphorism or ask your own question.