When writing a book and referring to a female and male aged 18–25, what term would be most appropriate? Boy and girl seem too young, whereas man and woman seem too old.

A boy/man emerged from the shadows.

Edit: I think the word I am looking for is similar to 'guy' but less American and colloquial. Any thoughts?

I think the best you can do here is

A young couple emerged from the shadows.

If you need to specify gender, I would use young man or young woman as appropriate. While I agree with Charles that in spoken English young man is used more towards children, I would posit that this is the case only when addressing them directly. I could, for example, address a 15 year old boy as young man. It would make me sound professorial, but it would not be out of place.

However, if someone were to tell me they

I would think of a young adult, not a child.

The closest to guy would be youth but it only applies to males when used to refer to individuals as opposed to groups. Better, but also exclusively male, is lad but that is also more British than American. Kid can be used, but is ambiguous. An older person can refer to young adults as kids but it usually means children. Finally, and probably best in your case, you can use youngster(s). Once more, though, this is a term that is used by older people towards younger ones. It is more used for teenagers and young adults than for actual children but it also carries an implication that the person using the term is older than those she is describing.

"Young man" and "young woman", if you want to call attention to their age.

As Jim said, "young adult" is what I would say. "Young woman"/"young man" somehow seems much younger in casual conversation. It's what people would call me when I was a teenager or pre-teen.

But in literature, you can say "a twenty-something" or "a youngish man" or "someone who looks college-age" or any number of other descriptors. What about their age is relevant to the work?

In work I do with this age group, they are always referred to as youth.

After pondering your request for a word "similar to 'guy'", I have thought of chap and fellow. The disadvantage of both words is that they do not specifically refer to youth. Furthermore, they are in no way gender-neutral -- both refer to a man or a boy. However, to me at least, they carry a connotation of sprightliness that I for one would associate with youthfulness. To be clear, they don't mean that the person is 18 to 25 years old.

(I myself would still go for youth, though)

You could put the setting or make reference to their ages earlier in the story, then readers will know the rough ages of the characters and you may not need to say 'young adult' later on.

Stripling is fit for this category.

Perfect example: the Army of Helaman, "coming from the mormon religion, out of the Book of Mormon" (Urban Dictionary). 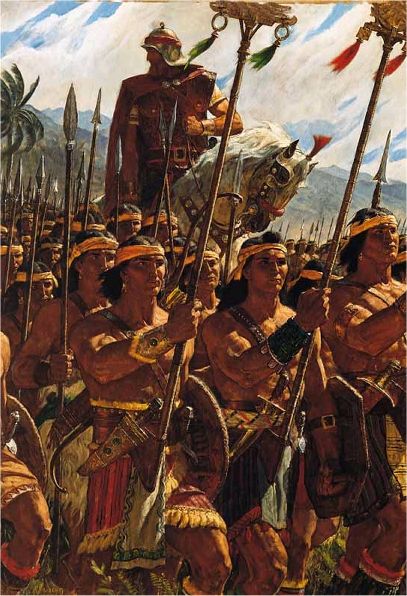 Three years later, sixty more young men from the land of Jershon joined ranks with their comrades (see Alma 57:6), perhaps having recently qualified by age for military service. Thus, in the thirtieth year, when Helaman wrote his long epistle to Moroni (see Alma 56:1), it seems possible that his youngest soldiers perhaps were age twenty-one, and his eldest, twenty-six.

"Adolescent" might work, if you are avoiding colloquialisms. But in the case you describe, I would use "a young man," or "a youthful figure," if you're preserving ambiguity about the character's identity.

Bachelor probably has too much baggage. Collectively 'chummery.'

But there are a number of military titles which might fit. Corporal, Sergeant, Lieutenant. Or

Ensign, (rank) "is a junior rank of a commissioned officer in the armed forces of some countries, normally in the infantry or navy." Wikipedia.

Buck .4. archaic A fashionable and spirited young man: 'the dashing young buck, driving his own equipage. ' Oxford on line.

Apart from Regency Bucks, it describes an age related status in history, anthropology of Shaka Zulu, and Angami Nagas.

The term is Millennials, used in advertising a lot.

user71176user71176
1
1
Add a comment  |
Highly active question. Earn 10 reputation (not counting the association bonus) in order to answer this question. The reputation requirement helps protect this question from spam and non-answer activity.

4
What is a "remedy" for a "pitfall"?
1
"Man" vs. "guy" vs. "boy"
7
A spinster or old maid! What is a similar term for male?
20
Is there a male counterpart to being a virgin?
17
What is the word for individuals who unwittingly post very similar questions asking for the same words, without doing any previous research?
4
What is a synonym for "childless" but less negative?