In my area, it's not unusual to hear expressions like

When they are self-referential, they are humorous partings between friends. When directed at others, they are insulting.

Are these just simple humorous similes, or is there something more complex going on? Are these only used for parting phrases, or are they constructed for other situations as well? Do these represent some common type of humor?

They're puns pretending to be similes, which is part of the source of the humour.

"Make like" is an American English expression that can mean "behave as though" ("He keeps making like he's the smartest guy in the class, though he's the only one that keeps failing") or "behave in the manner of" ("He camped it up and made like Diana Ross").

For that reason, "Make like an X" sets us up for a simile or analogy. At "I'm going to make like a banana" we're expecting for the next thing to be something a banana does, that the speaker is claiming he is going to likewise do. Already this promises a punchline because there isn't that many things bananas are notable for doing, that people can do (though once you're used to the form, "I'm going to make like a banana and slowly ripen before rotting and turning to mush" has a humour of its own).

Then we get "... and split", which is the pun. As a pun it is doing two things at once. One of them is referencing banana splits, and the other is using split in the colloquial sense of leaving a place. This last is of course the real meaning of the expression; you're going to leave.

It's also notable that the other sense of split is a wrong in two ways. Firstly we're using it as a verb, when the banana-related sense is a noun. Secondly, we're using it as a word fully separate from banana when we don't use it this way; we talk of "banana splits" as a compound noun, not of just "splits".

The second "mistake" isn't included in most variants of this joke, but the first one is. It's the same for example in "make like a tree and leave", as trees don't leave they have leaves. This form adds a different word-clash because trees have leaf singular, leaves plural, not leave.

"Make like a prom dress and take off" is a less strong clash — between an intransitive sense of the verb phrase, and a transitive one, and where "prom dress" would be the object, not the subject. It also adds that taking off isn't particularly associated with prom dresses (equally to putting on, and less so than wearing), so makes us think more strongly about taking off a prom dress, which has sexual implications.

From the list Callithumpian gives us, most are close to one these in mechanism. A few depend on specialised knowledge to get, and therefore appeal to the in-group that would understand them, acting as a shibboleth.

The social difference between self-referential use and insulting use is because if directed at someone it changes to the imperative mood, and ask that they leave. This has two implications.

Here you've not just broken those two guidelines to polite behaviour, but you've also made a joke of it. Barring a context that justifies this (friends who are often jokingly insulting each other), it is therefore impolite to the point of insulting.

Edit: I think it's worth looking at the older form that StoneyB found in the same way we have the current form above, because it reveals something else going on in the newer form, that we can't see otherwise.

The older form is simpler, a straightforward pun of hoop in the sense where it is a variant of whoop, and hoop as in a rigid circle, which can hence roll away. It's use of make is different—"make a noise" is sense I probably need not explain—and the pun does not have the "deliberate mistake" level of nonsense of the "banana" and "tree" variants.

It's still got a nice sprinkling of nonsense though, it doesn't just pun in dragging in another sense to colour the main one, but jumps us comically from one to the next. There's a certain forced quality to "make a noise like a hoop" rather than "make a hoop" or "make a hoop noise" (and it's less good to our ears as hoop in that sense is now uncommon at least IME). That somewhat forced quality though is necessary if it's going to both make sure we've the noise sense of hoop in mind, and also jump us straight to the ring sense.

What this adds to my answer above, is that at some point people knew this as a common joke (StoneyB has demonstrated that well), so the more recent form was subverting a well-known joke in using make in a different sense of the word to how that form did.

It's not a vital piece of the joke, so the joke still works today, but it means there was yet another piece of humour at work when the "banana" and "tree" forms were first invented.

I cannot commend Jon Hanna's erudite answer too highly. I should like to add, however, that the form of the joke probably goes back to a slightly different slang phrase which surfaces in 1908. I first encountered this in two works I was very fond of in my childhood:

Lord Peter turned suddenly and savagely on the young man from the Morning Star, who still hovered at a little distance. "See here, my lad, if you don't make a noise like a hoop and roll away, I shall have something to say to your editor.”      —Dorothy Sayers, The Nine Tailors, 1934

The phrase seems to have been very popular in the early 20th century. It’s even used in an advertisement for toilet seats in the professional journal Domestic Engineering, XLVII,April 3, 1909—June 26, 1909. It may owe its popularity to a 1908 song by Ren Shields and Fred Helf: 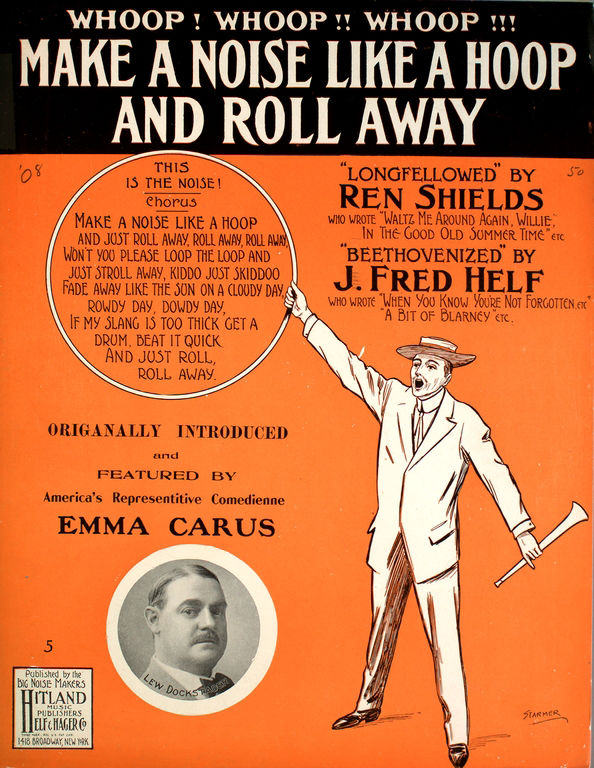 But it’s claimed in Vaudeville: From the Honky-Tonks to the Palace, Joe Laurie, 1953, that the phrase was actually invented by a vaudeville comedian:

Bert Leslie also ran sequels to his acts. He was the originator of slang in his skits, expressions like "Under the sink with the rest of the pipes," "Make a noise like a hoop and roll away," etc.

Leslie (1871–1933) was billed as “The King of Slang”, and in a fascinating interview with the New York Times for September 18, 1910, he explicitly claims the phrase (but leaves room for doubt):

“Because a phrase is so vivid it is picked up instantly. You have to guard your slang like gold in rehearsals. […] When I was rehearsing for ‘Fluffy Ruffles’ with Miss Hattie Williams, I had invented an excellent line, ‘Roll away and make a noise like a hoop.’ A couple of nights later I heard the line to my utter amazement in ‘The Traveling Salesman,’ which opened before our piece.”

Interesting questions. I think they are simply humorous similes. I'm not sure what you mean by "something more complex going on." I've only heard the construction used as parting phrases.

I was hoping a look at the origin of this joke phrase might turn up some insights, but I wasn't able to find much easily. It seems the phrase make like (something) started entering common usage in the mid-1940s. It was quite commonly used by the writers of the music magazine The Billboard, but also popped up in other American periodicals of the time such as Boy's Life, Popular Mechanics, and even Life.

Assuming make like a tree and leave was the original joke, I found this back to 1960 in a story for The University of Kansas City Review. Its popularity as a phrase begins to climb by the mid-70s, along with new constructions of the joke.

Not the answer you're looking for? Browse other questions tagged humor puns simile or ask your own question.

4
Technical term for "make like a banana" & "make like a tree" idioms
0
Two-part phrases: official term?
10
Meaning of "Put an egg in your shoe and beat it"

0
Should I use "like a..." or "like the one of a..." in the following sentence?
1
as though Pharaoh should set the Israelites to make a pin instead of a pyramid
3
Similes that do not make use of like or as
0
Which literary device is used in these Thoreau quotes?