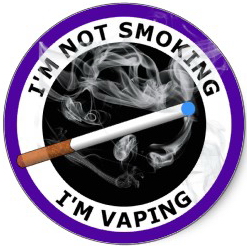 "Vaping" is apparently the practice of smoking one of 'em newfangled e-cigarettes. Where does the word come from and when was it first used?

Vape has been added to Oxford Dictionaries Online and according to their blog the term predates the device.

E-cigarettes were not commercially available until the 21st century, so it is counterintuitive that the word vape dates to the early 1980s. Its earliest known use is in an article, “Why do People Smoke” in New Society in 1983. The author, Rob Stepney, described a hypothetical device being explored at the time, “an inhaler or ‘non-combustible’ cigarette, looking much like the real thing, but…delivering a metered dose of nicotine vapour. (The new habit, if it catches on, would be known as vaping.)” Thus, it seems that vaping the word existed before vaping the phenomenon.

The verb to vape is new to me but refers to the act of using an e-cigarette. Given the relative novelty of e-cigarettes it's unsurprisingly a new term. It's used to differentiate from smoking a traditional cigarette, as e-cigs don't give off smoke but instead give off a vapour.

Users may wish to emphasise this point, and some claim it's less (or not at all) harmful for them and those around them, although this isn't fully understood yet. E-cigarettes are becoming more popular, and regulators haven't fully decided how to deal with them, so the term may grow in popularity, although it may sound too close to rape for others.

The earliest definition of vape on Urban Dictionary is from Mar 31, 2004, a noun and verb back-formed from vaporizer, and is currently the second highest voted definition:

Slang term for a vaporizer, which is used to smoke Marijuana, Tabacco and other smoking mixtures.
There are two different types of vaporizer. One kind heats the metal bowl in order to release the active ingredients, but at a low enough temperature that most toxins and carcinogens are not inhaled and the plant material is not burned. Another kind of vaporizer uses hot air to heat the herbs.
The vapor produced is inhaled.
Vaporizers are a very healthy alternitave to smoking, and reduce your intake of toxins greatly.

Johnny will go to a head shop tomorrow and buy a vape.

The highest voted is the e-cigarette meaning, from Jan 13, 2009, back-formed from vapor, as opposed to the verb smoke from traditional cigarettes:

To inhale vapor from E-cigarettes. Used because "smoking" an E-cig doesn't apply as there is no smoke only vapor.

I'm able to vape in a movie theater.

Vape as in a vaporizer can be found at least as early as 1998, probably much earlier. Unsurprisingly, it's much more recent when referring to relatively new e-cigarettes. Here's an April 24, 2008 post on e-cigarette-forum.com:

"Vaping" is just a fancy way to avoid the term "smoking", since smoking is illegal everywhere and these things don't burn anything and don't produce second-hand smoke.

The earliest I found on this forum is from the forum founder pondering in an early post on December 18, 2007:

"E-smoking" is a bit of a handful, "Misting" sounds far too fey, "Vaporizing" or "Vaping" has drug connotations.

There must be a better word for my new hobby! Suggestions?

I have received both my Sedansa and Njoy ciggies. I would say they are pretty much identical in both appearance and usage. I can interchange the filter cartridges as well as the batteries between the two. They vape about the same. I can drip in both cigs, whether into the atomizer or into the filter. I really like them both.

The e-cig minicig from .......... sucks -- and I don't mean literally. I can't get anything out of them. I don't like their pipe either. It vapes plenty; you just can't inhale and exhale much of anything. I am sending back the pipes and minicigs to ........... I have now ordered ..........'s regular e-cigarette. Hopefully that is more like the Sedansa and the Njoy cigs.

And the same user later that day:

How about you? How are you doing with your ratio smoking/vaping? Are you dripping?

It's now been accepted by the online e-cig community. On the top of every page is a current appeal to vaping Europeans and Americans (along with a safety recall for a device called SLB Vapros V1):

A storm is brewing in Europe. Please read this superb thread regarding the drafting of the EU Tobacco Products Directive, and how if passed unadulterated, it will outlaw your access to effective vaping supplies. Again, your action is needed to ensure that the future of vaping is not decided by those with vested interests against it.

Americans! Please sign this petition - 8,724 signatures left to get an official response. Don't let the FDA take away your right to vape.

The Urban Dictionary has an entry for this sense, but there are also entries for its use in the smoking of marijuana through a vaporizer, which seems to be its provenance. The Urban Dictionary doesn’t give dates of first use, but the source word vapour is ultimately from the Latin word for steam.