What do the question marks in this quote mean (or are they typos)?

I read the following in an article entitled "Duke resets after the 'annihilation'" By Laura Keeley of the Raleigh News and Observer, dated Friday, January 25, 2013. I've not seen question marks used this way before. I added a screenshot just in case the text gets changed.

“He’s like, ‘you guys don’t deserve to have your stuff here,’?” Williams said of Krzyzewski. “?’You guys have to play more cohesively like a team.’?” 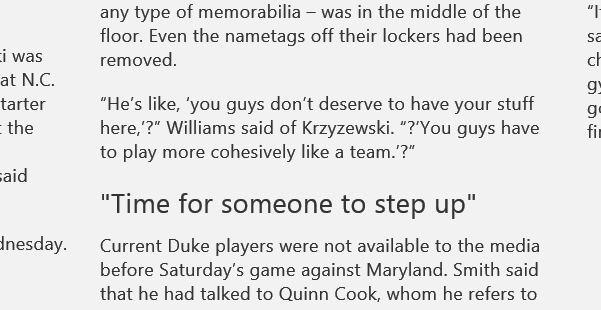 Well, I went looking, and I found several versions with different mistakes.

“He’s like, ‘you guys don’t deserve to have your stuff here,’ ” Williams said of Krzyzewski. “ ‘You guys have to play more cohesively like a team.’ ”

From which I can confirm StoneyB's suggestion in the comments, there is indeed U+2006 in there, that is to say the way we do thin spaces on computers.*

Now, some people may see the above with a problem similar to that shown in the image in the question, or with a box between the single and double quotes, or a box with 2009 in it, or with too much space there.

What you should see is a slight space between ’ and ”—enough to tell that they are separate characters, but less than the space between the words. More on that later, because that's the most on-topic part that actually does have something to say about English punctuation.

Now, in the screenshot I can see that some of the other possible problems didn't happen, so the explanation for the question marks is that they are reading it with a font that doesn't support the   character on a device that substitutes ? when that happens (there are better fall-back approaches, but that's the one they went for).

Now, the character itself is a matter of English-language typography. The relationship between a language and typography is loose and many typographic decisions have little to do with what language is involved, or even which script (Latin as per the English language, Cyrillic, Hangul, etc.) is used.

At the same time, some do influence readability and differ from language to language, and indeed languages and typography have been influencing each other since they days of Gutenberg, and in the case of English since the days of Caxton.

Using a thin space (generally about a ⅙–⅕ of an em in size) when you've a “ right next to a ‘ is a good idea in end-result writing (printed books etc.) but rarely worth worrying about in most writing, and handled by kerning pairs in some modern computer fonts. Sadly it doesn't work if you've the font problems that Fred had, but it's worth reading on the different sorts of spaces if you're e.g. self-publishing or producing your own web pages, and the wikipedia page isn't a bad place to start.

*At least, the way we do it by adding characters, better typographic control as offered by TEX and the like can take a more fine-grained approach again.