Is there an expression for a person who eats very little, doesn't like eating, avoids it?

I don't mean the medical condition of anorexia, I mean a common preference, like kids who need a lot of convincing to eat their lunch or adults who can run a whole day on a single donut and realize this is wrong but simply don't care and won't eat a solid meal unless you shout at them.

Very informal or even slang words are okay.

You could call them nibblers or pickers.

Someone who eats like a bird is someone who "eats in small amounts rather than in a single full meal."

What you mention does sound like anorexia, (which on its own just means "not eating much") but not anorexia nervosa for which anorexia is so often used as a shorthand that the word is a fraught one to use in any other context. A word that requires you to explain how you mean it, is a word that's no longer pulling its weight.

You could have inedic as an adjective formed from inedia, but inedia is so obscure as to be pretty useless too.

Saying someone "lives on air" is sometimes used as a half-joking colloquialism, and sometimes as an serious claim about inedic yogis. That half-joking use might match your use.

The closest thing to your request would I think be "abstemious." This is an adjective (an abstemious person). It can refer to someone who eats and/or drinks in moderation.

Since you specify something short of pathological eating, moderation seems to fit the bill.

To complement both Jon Hanna and Fumble Fingers' answers I'd like to add the following:

In TV Tropes, Forgets To Eat is described light-heartedly as someone:

... who's notorious for ignoring their body's need for nutrition and has to be reminded to eat. [...] as workaholics and others will become so engaged in something that they do forget to eat. Isaac Newton was famous for being so obsessive-compulsive about his work that he would work hours and hours while neglecting to bathe or eat. Because this is common among obsessed gamers, Anti Poopsocking had to be put in place in many games. Science further backs this up, as the nervous system has the digestive system slow and close up if a person is under stress. Nobody wants to stop for a bathroom break or snack when being chased by a bear. 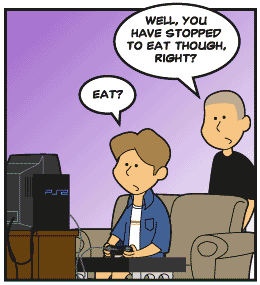 Not the answer you're looking for? Browse other questions tagged single-word-requests expression-choice or ask your own question.