"To shoot out of cannon into sparrows"

In Russian we have idiom/saying "To shoot out of cannon into sparrows" (literal translation) which is used to convey an idea of applying too drastic measures to small problems. I believe there should be some native-English equivalents to this saying. Can you share if there are any?

We speak of using a sledgehammer to crack a nut.

Overkill is originally a military analysis term from the Cold War, referring to the fact that the belligerents each had far more nuclear weapons than they would need to completely destroy the other. These days it's generally used metaphorically to mean precisely the sort of excessive effort or excessive means you talk of.

Bring a gun to a knife-fight is another that comes from combat originally.

One American variant, "kill a mosquito with a bazooka".

Two idioms would be:

The wheel in question being a device for capital punishment of humans. So using it on a tiny fly would, quite literally, be overkill and it is also not clear if you would actually hit the fly at all or if it would be able to get away swiftly — a connotation it has in common with the Russian idiom you are translating. 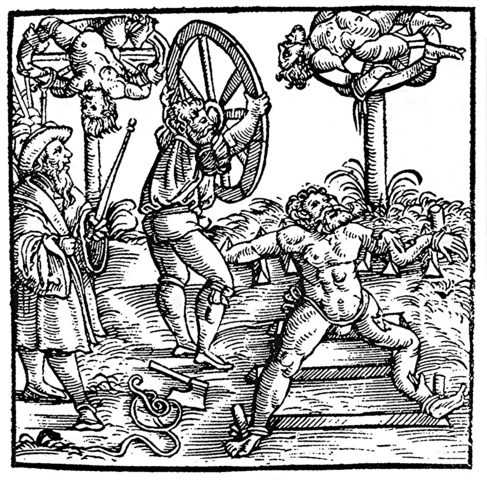 “Never use a shotgun when a flyswatter will do.”

As Robert Heinlein put it,

You don't spank a baby with an axe.

Heavy-handed is one that can be applied to a lot of different situations. Also "make a mountain out of a molehill" is a good one.

As AJ Henderson notes in the comments, there are several common variants of "attacking some small creatures with a large and unwieldy weapon" in use, and I doubt most English-speakers would bat an eye at "shooting sparrows with a cannon."

That said, in my experience, flies do seem to be a more common target in English than sparrows, while the most popular weapons seem to be either cannons or, for a more personal type of combat, sledgehammers. So I'd most likely go for either:

But if you'd prefer to target sparrows instead of flies, please do. Such little departures from the most heavily trodden path will simply give your writing that little bit of extra flavor.

I once used the phrase built a cannon to kill a fly in a paper, referring to the complexity of the "Commercial Exchange" semantic frame that is required in order to understand the meaning of the word money.

You could always nuke the entire site.

Ripley: I say we take off and nuke the entire site from orbit. It's the only way to be sure. -Aliens

Share
Improve this answer
answered Jan 17, 2013 at 20:41
user14070user14070
2
Add a comment  |
Highly active question. Earn 10 reputation (not counting the association bonus) in order to answer this question. The reputation requirement helps protect this question from spam and non-answer activity.

Not the answer you're looking for? Browse other questions tagged idioms phrase-requests translation popular-refrains or ask your own question.

33
English equivalent for "Don't burn your house to smoke out a rat!"
14
Word or phrase for "using excessive amount of technology to solve a low-tech task"
21
Are there popular English sayings to express “Big fuss, tiny result”?
4
Is there great difference between “Make a mountain out of a molehill” and “Much ado about nothing”?
5
Using disproportionately heavyweight means to achieve a minor goal

20
Idiom/phrase which means "to pretend not to understand or know"
3
Is there any alternative expression to “Brace Yourself ”
2
Word or phrase for mere coincidence that brings happiness
7
How can I rephrase "enough rope to shoot yourself in the foot"?
6
English equivalent for the Persian idiom "Putting the drill on poppy"?
9
Translation of German "Es wird nichts so heiß gegessen, wie es gekocht wird"
60
"Whatever a Russian does, they end up making the Kalashnikov gun"? Are there any similar proverbs in English?
13
Is there an English equivalent of the proverb 水清ければ魚棲まず (if the water is clear, fish won't live there)?
0
Possible meanings of “[they] are forming a procession in the square” in context
8
Is there a good equivalent for the Italian proverb "Non tutte le ciambelle riescono col buco"?